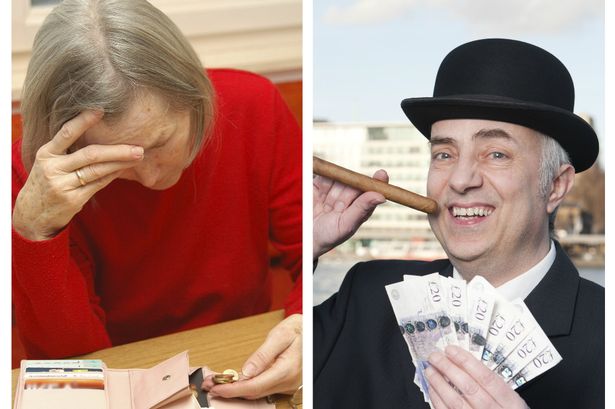 All pension plans are basically the same, right? Wrong! They are definitely not all the same, and even though the differences might seem small, the impact of those differences can be HUGE. When you are choosing a pension plan, you are not just buying a product – you are making a financial decision which will have a significant direct impact on Future You. Make the right decision and you are set for a happy retirement; make the wrong decision and you could be facing disaster.

How pension plans are not all the same

It also means that if the company runs into trouble or goes bankrupt, the assets of the pension plan can be used to pay the debts of the business, which could completely wipe out the pension value. Unless you own the business yourself, any time you are offered this sort of pension plan, try to avoid it in the same way that you would avoid being hit by a train, or being chopped into pieces by an axe-wielding monster.

More commonly, a corporate pension plan is run separately to the main business – as a separate business. This keeps pension assets separate from the business assets, but doesn’t separate the pension assets and liabilities of different employees.

This is one of the two main problems for those people saving into, and relying on, this type of pension plan – they don’t actually have any assets in their own name, they simply have a promise from the pension plan that they will receive whatever they’ve been told they will get, in future. And just like how your salary will stop if your employer goes bust, when your pension plan is run as a separate business and you’re one of the many people owed money in future from that pension business, if that pension business goes bust (or cannot meet its full  obligations), your pension can stop, or be reduced, simply because there isn’t enough money to go around.

This is connected to the second main problem – when you put your trust in a collective pension scheme which is run as a business, Trustees are appointed to make the decisions of that “business” – the Trustees job is basically the same as Directors of a business. They make the decisions which determine how successful (or not) the business is, and just as directors of businesses impact the wealth of the shareholders of that business, Trustees of collective pension schemes impact the wealth of the people owed money in future from that collective pension scheme. If the trustees continually make good decisions, you will be fine; if they make even one or two bad decisions, you’re screwed.

Unfortunately, bad decision-making by pension trustees is more common than you might think. And generally speaking, things happen in this order: 1) Trustee gets well-paid job, hired by other trustees, but paid for from your pension value 2) Trustee makes bad decisions 3) Pension savers discover bad decisions of the trustee 4) Trustee runs away (or resigns, gets fired etc – sometimes with a large pay-off depending on how well they negotiated their employment contract at the start (and/or how badly the other pension trustees negotiated that same contract) 5) Pension savers suffer. Here’s one recent example: https://www.pasadenastarnews.com/2020/08/05/pasadena-state-pensions-investment-strategies-threaten-citys-finances/

Rather than wait for other people to make bad decisions and then run away after ruining your life, it is far better for you to run away as soon as you are offered this type of pension plan. Future You will thank you for it.

Moving on to government pension schemes. Many people rely on the “safety net” provided by countries and governments for their retirement income, because the government says that if you dutifully pay lots of tax today, they will pay for your life in retirement when you get old. Awww, so sweet and kind!

There’s only one problem – in many cases, you don’t actually get what you were originally promised. Around the world, the same “unexpected”, “necessary”, “unfortunate”, and “unavoidable” changes keep repeatedly being forced onto people – both those not yet retired, and those already retired – such as increasing the age which you can start to receive a pension (so you get less money than you were promised, and make you work longer, AND pay more tax before you eventually get less than you were promised), as well as simply reducing the amount you are paid, or making changes to the way the pension value is treated over time (i.e. initially promising to increase it at the same rate as inflation, and then changing it due to some “unexpected”, “necessary”, “unfortunate”, and “unavoidable” reason which means that there’s still enough money for bombs and politician salaries/expenses, but not enough money for pensions.

In Greece, pensioners had their pension income cut by up to 60%(!), because of “unexpected”, “necessary”, “unfortunate”, and “unavoidable” reasons, namely that politicians from previous years had wasted billions of dollars on various vanity projects, and Goldman Sachs urgently needed the money they had lent to the Greek state back. You can read about that here: https://www.bbc.com/news/world-europe-19298681

In Venezuela, despite a wide range of benefits for pensioners, many live in poverty because the value of the currency has fallen so much, so even though they receive “a pension”, the pension money isn’t enough to buy the food they need, let alone have a nice life in retirement. Many economists put the reason for the price increases (inflation) down to the government policy of “printing more money” (which makes it worth less), which in turn raises the cost, as measured in “money”, of things like food, accommodation, and everything else measured in “money”, such as equities/stocks/shares and investment funds.

Incidentally, “printing more money” is now the economic policy of the USA, UK, EU, and many other countries worldwide. You can read about the affect that policy had on Venezuela here: https://www.miamiherald.com/news/nation-world/world/americas/venezuela/article181053381.html

If/when bad decisions are discovered, they run away (or resign, retire, or very occasionally get fired) and you deal with the consequences. Better idea: get a pension in your own name, which is subject to the same laws and regulations which govern the asset security of large multinational corporations. There is much less chance of those being changed due to “unexpected”, “necessary”, “unfortunate”, and “unavoidable” reasons!

If you are still not convinced, know that in general, there is a huge gap between the value of pension assets – both public and private – and the amount they owe in future. This “funding gap” is not pretty, and financial experts expect it to be a total disaster at some point in the relatively near future. Have a look at this, it’s only a two-minute read but very effectively illustrates the problem: https://ig.ft.com/sites/pensions-interestrates-explainer/

How to make sure your pension is safe

Get a pension plan in your own name, which nobody else can change the terms and conditions of, stay in control of your own assets, and be the boss of your own life. One such pension plan is the one highlighted at https://www.PensionsForNomads.com. Future You will thank you for it.